Currently, from my point of view, there are 7 different series of Valinches:

Series 1: Everything started on 05/29/2001 with the two Valinches "I was there" (barrels 5079 and 5081). Both were distilled in 1970 and were available for purchase on the occasion of the new opening of the distillery on site. Bruichladdich Valinches with a wide variety of labels were available until the end of 2013. Almost all of these Valinches are lightly peated Bruichladdichs, since the whisky was distilled before the closure in 1994, and up to that time they basically peated with up to 15 ppm. Port Charlotte Valinches were only available twice up to that point (See Series 3) ...

Series 3: ... In December 2011, the Prediction, the first Port Charlotte and thus the first peated regular Valinch came into the store. There was the First Cut for the Fèis Ìle 2007, but even if it came in a Valinch bottle, it was not a single cask with its 950 bottles from bourbon casks and thus it does not fit into the regular series of these bottlings ...

Series 4: ... then in November 2013 there was the first Crew Valinch. The first bottling features Allan Logan. To my knowledge, at that time, there was no plan to continue this series permanently with all employees. Today (September 2022), with Crew Valinch 62, we are well on our way to seeing all the people behind Bruichladdich immortalized on Valinches.

I think it's great! On site, you recognize many employees immediately and can thus better imagine the work in the whisky production and comes especially quickly times in personal conversation. In addition, these bottle labels have a lot to do with appreciation for the people who work there every day and I admit: I like that. By the way, Crew Valinch 03 - Tina Mackinnon is (so far) the only Port Charlotte in this series ...

Series 5: ... then in November 2014, the first standalone Port Charlotte series was launched. Called Cask Exploration, a total of 21 Valinches were released in this series by May 2018. All bottles in this series were numbered consecutively and a Gaelic designation was added ...

Series 6: ... after Feis lle 2018, the bottle design of the Port Charlotte Valinches changed. Since then, they are quasi 0.5 liter miniature editions of the regular green Port Charlotte bottles, which were launched on the regular market a few months earlier in the new bottle design. The designation also changed and the "Cask Exploration" series became the "Distillery Valinch" series. From this time on, the Gaelic designations were dropped and the origin of the casks and the year of distillation are listed.

Series 7: ... the last series is not a real series. Rather, they are Valinches, each of which is sold at the Feis Ile in the distillery. Partly they are single casks, like the 2019 Fèis ìle Valinch from a sherry cask. Partly, however, they are also single malts from several casks, such as the High Noon, which was released for the 2015 Fèis ìle together with two other bottlings. What all the bottles have in common is that the bottle shape and the bottle size are identical at 0.5 liters. It should be noted, however, that all these bottlings were always already bottled on site and, contrary to the usual possibility at the Valinches, you could never personally fill them from a barrel.

by Roddy MacEachern and a few additional infos by Jens Freymuth :-)

=> If you have more or other informations about labels, please don’t hesitate and send me a message (via Facebook Bruich/LADDICH-O/ldenburg or mail nerd@laddienerd.de).

Nerd Info: The Ghost Ship is the oil tanker (then the ‘Keewhit’) that comes into Bruichladdich Pier to re-fill the Gleaner Oil Depot in Bruichladdich. Back in 2007 the National Media reported that an “Oil shortage hits whisky island” which could force the shutdown of distilleries on the island. Although a £3m pier extension to Bruichladdich Pier had recently been built to allow an oil tanker to dock, low tides and silting meant that there was insufficient depth of water to allow the tanker to berth. This combined with several period of bad weather during winter/spring caused seriously low stocks of oil on the island. The Ghost Ship valinch recognises one of the few occasions that the tanker actually managed to berth at that time.

Nerd Info: The Distillery that never was! Back in 2007 Mark Reynier had great plans to re-build ‘Lochindaal’ distillery in Port Charlotte. In contrast to Bruichladdich it was to be a very modern distillery and the production of Port Charlotte spirit was to take place there. The Edmonton pipe band (flown over from Canada) marched a procession of around 200 people up the hill in front of the existing warehouses where the launch ceremony took place. Lady Caroline McTaggart performed the official part of the ceremony by cutting the first turf (the FIRST CUT) out of the ground where the distillery was going to be built. A Port Charlotte Distillery flag was then raised and the audience were served a dram (of First Cut) before they made their way back to Bruichladdich for the open day.

Nerd Info: MICHAEL JACKSON - Marks eulogy to Michael Jackson (writer and Journalist) who died at age of 65. Not to be confused with the so called ‘king of pop’ who died a couple of years later, this Michael aka the beer hunter, wrote many influential books on Beer and Whisky. Humorously to some, but not all, in 2009 when the ‘other’ Michael Jackson died. Google’s search analytics got it a bit wrong and anyone doing a search was given the details of the whisky writer not the pop star.

Nerd Info: The text on the bottle says it all: “This bottling was dedicated to young film producer, Stuart Rivens, who visited the island and distillery the make a film for the BBC. The experience overwhelmed him so much that he published a book and made a film about the whisky dream. The book followed the main protagonists, Mark and Simon along with Jim and Andrew in their endeavours to bring Bruichladdich distillery back to life after seven years of silence.”

The ‘Whisky Angel’ picture used was part of a beautiful set of images taken at Bruichladdich with a whisky-haired (OK maybe ginger – but that’s typically Scottish) maiden. I’m sure the images were part of a failed ‘Whisky-Coast’ adventure promotion thing blending all Islay whiskies, with Jura, Arran etc. I say failed because I have never seen anything of it apart from initial tests… initial tests involved taking a bottle of whisky from each distillery, pouring it into a big bucket and giving it a stir!.... no wonder the project never took off!

Nerd Info: A subtle jibe at the SWA regulations and naming conventions regarding the ‘blended malts’ category of Scotch Whisky. Whilst Bruichladdich were in pursuit of purity and honesty in the sense of terroir, non-chill filtering, no artificial colouring etc. they were drowning in a market of mass produced, artificially coloured ‘bland’ whiskies.

“Here is a 14 year old actual ‘Single Malt’ – not the Glen McThis, Glen McThat, Glen McTheother, Deceit, Humbug & E150” is stated on label. However, I’m sure by stating the above as ingredients, we could have breaking regulations somewhere or other. This was also enhanced in a Chateau d’Yquem Cask – this was premium stuff, these casks are not easily come by… (also nowadays we can’t say it was d’Yquem - we have to say is was some French wine).

Nerd Info: Diaspora - the dispersion or spread of people from their original homeland. Here, Mark is making reference to both the highland clearances, and also I believe, to the lack of jobs and affordable housing on Islay - still an issue today which forces the younger generation to leave Islay for the mainland.

SOUNDS OF SNOUTS IN THE TROUGH

Nerd Info: In 2009 there was a huge scandal regarding MPs expenses and widespread abuse of House of Commons allowances. Amongst the many indiscretions was the phenomenon of ‘flipping’ their second home allowance from one property to another to allow themselves to have a home in London and in their own constituency. There was also claims for phantom mortgages and the use of legal loopholes to avoid paying capital gains tax. Amongst the more extravagant claims were for building moats and duck houses. Mark composed a little song about their expense claims based on the ‘My Favourite Things’ song from The Sound of Music and compared the MPs to Pigs feeding at the (money) trough with the valinch title. Back in the days when Mark ran the show at Bruichladdich he was always a bit controversial!

Nerd Info: Celebrating the 2013 carnival in Rio which attracted more than 1.5 million revellers. This is Bruichladdich own ‘party in a bottle’ released a few weeks prior to the 2013 open day  - an event which year on year was becoming the biggest party on Islay.

Nerd Info: “Still Game” is a Scottish sit-com about 2 cantankerous Glaswegian pensioners (Jack & Victor) and their views on “how it used to be in the old days”. We were just poking a bit of fun at Jim & Duncan and their ‘games’ in the still house.

Nerd Info: Vatting of different aged whiskies who’s ages add up to 134. The festival that year was 'Wild West' themed. The courtyard was dressed with large posters of staff members dressed as cowboys and warehouse 12 had a huge Grand Canyon backdrop. Bar signs were changed to 'Saloon' etc. etc. The bottle was called 'High Noon' in reference to the gunfight at the OK corral which took place in 1881 (the year Bruichladdich was established). Technically 'High Noon' and The gunfight at OK corral are entirely different things with the latter happening at 3pm. But that year with the bottling being called High Noon, the gates opened at 12 instead of the usual 12.30.

Nerd Info:  This was the first ‘official’ Port Charlotte ‘Valinch’ - in the sense that you could pour your own bottle in the shop. Previous 500ml bottles (First Cut & Prediction) were bottled and labelled prior to sale.

Nerd Info: The toothache stone photo was taken by Amanda (partner of Roddy) after hearing about it from one of our old friends (or maybe not so much old, as learned). The friend was Alastair McLellan (his brother owns the Lochindaal Hotel). Alastair's stays in the end house in Bruthaich Dubh... His house features prominently on edition number 03.

“Arch of the Bridge”

Nerd Info: The toothache stone photo was taken by Amanda (partner of Roddy) after hearing about it from one of our old friends (or maybe not so much old, as learned). The friend was Alastair McLellan (his brother owns the Lochindaal Hotel).

If you take the road out of Port Charlotte past the school to Kilchiaran till you pass the water station on your right, take a look into the glenhave a good look in the glen on your right. Here you will find the Tooth Stone, about 200 meters away from the road and almost any crack is filled with old nails.

Image: Duncan McGillvray holding one of the above

“Put into a Barrel”

Image: Can’t be 100% sure, but I think this is Sean Gordon hammering the bung in.

“The Crashing of the Waves”

“He who waits long at the ferry will get across sometime”

Nerd Info: This is an old Gaelic proverb which in today’s terms equates to “All things come to those that wait”

Image: Raymond Fletcher harvesting the Barley at Dunlossit for use in Bruichladdich Islay Barley.

“Business of a Cooper”

Image: Looking over Lochindaal towards Bridgend/Bowmore with Lochindaal lighthouse on left hand side of image.

Nerd Info: If you look up ‘tuim’ in the Gaelic Dictionary (Am Faclair Beag) you will see it translated to: “respect, esteem, regard” However, if you ask my Aunt Deirdre (who used to be a Gaelic teacher) she will tell you, and I quote “Tuim is a version of taoim = bilge water”. So, if you enjoyed this valinch keep my intentional translation, if you didn’t then feel free to call it Bilgewater from Western Sea!

“Being thrown about by the Ocean” 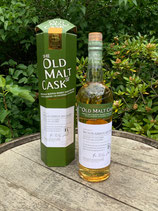 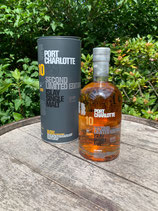 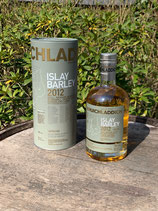 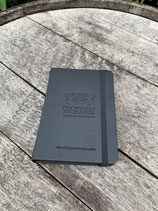 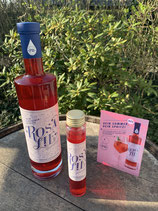